Artist of the Week; Kylie Heath 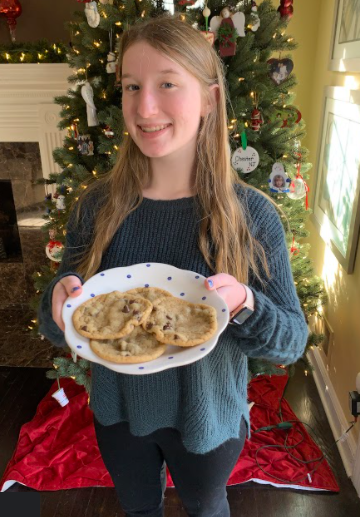 Kylie Heath is a sophomore at West Morris Mendham high school whose hidden talent is baking. Baking is her means of cheering up and brightening the lives of others. Kylie got her start in baking during quarantine, where she then started baking on a regular basis. “Since we were all stuck in the house,” she says, “I decided to devote my time to something fun and meaningful to other people”. Kylie shares her baked goods with friends and family because she enjoys it, and she says that it makes her feel better when she can do good for other people. She has pure intentions behind baking so frequently, and because she enjoys baking so much it isn’t a hassle for her. She says that “it always makes me incredibly happy to see their smiles when I make them things” and that she loves “to do nice things for other people, and baking is the perfect way to let them know I care”. Her baking is no joke, and it’s very refreshing to see the loving intentions behind her shared baked goods. She also stands alone in the kitchen because she gets very controlling in the kitchen. “It’s funny,” she comments, “sometimes my younger sister will help me, but other than that I enjoy baking by myself.”

While Kylie has an arsenal of recipes and sweets, her favorite is “making banana bread” since “it’s fairly simple and there are so many ways to customize it”! Banana bread is an example of “recipes on the internet that require few ingredients and little time”, which are great for beginners because they are easy to make and there are several variations of recipes with different results. Her final tip for any upcoming bakers would be that “it’s very important to pay attention to the temperature of the butter. If the recipe calls for softened butter, you should never put it in the microwave. It’s best to leave it on the counter to thaw and get down to room temperature as opposed to melted butter. It is also very important to measure correctly, especially flour. Brown sugar needs to be packed, whereas flour should be spooned and leveled. I’d say the easiest thing to bake would be cookies.” She’s really well versed in the ways of baking!