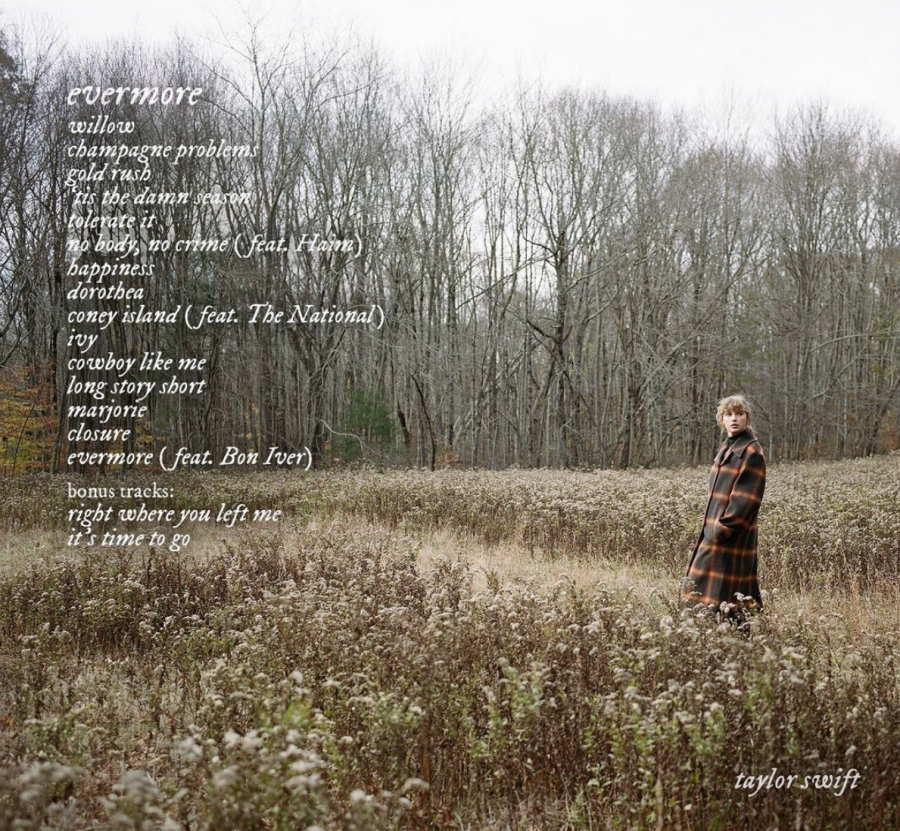 Global phenomenon Taylor Swift released her 9th studio album titled “evermore” on Friday December 11th. Following the surprise drop of her 8th studio album, “folklore” which was written in three months over quarantine, Taylor Swift shockingly released yet another album that enchants anyone who listens to it. Like “folklore”, “evermore” takes the character of an alternative-folk sound, and showcases Swift’s incredible song-writing and storytelling. Swift describes on her Instagram that her and her co-writers Aaron Dessner(of The National) and Jack Antonoff(of Bleachers) just “couldn’t stop writing songs,” and that they “were standing on the edge of the folklorian woods,”. Hence, “evermore” acts as a sister album to “folklore”, and almost a continuation of the mystical world of Swift’s imagination.

There is no doubt that Swift has an incredible work ethic, and this was exemplified through her release of two albums in less than six months. Some artists do not release albums for years on end, however Swift was motivated to help those who need to “cope with missing loved ones,” and the other lonely feelings in this quarantine holiday season. In an interview with The Rolling Stones, she describes “folklore” almost like a “hug” for listeners, and “evermore” is no different. The relaxing nature, and way that the songs make listeners feel validated and heard is a characteristic feeling from Swift’s music. Songs like “tolerate it”, “happiness”, and “evermore” are some of the more emotionally charged songs on the album. Yet, each song on the album has different meanings for different people. In the current crisis of the world, people need this album; they feel as if their feelings are understood, and this brings a much needed sense of peace in people’s lives.

Swift continues her enchanting storytelling, with stories of her grandmother in the song “Margorie”, a song focusing on infidelity and murder that features the band Haim titled “no body, no crime”, and of a couple who has completely different intensions in “champagne problems”. It is fascinating to follow stories of her own life, as well as stories from different perspectives than her own in songs on the album. In addition to featuring Haim on the album, co-writer Aaron Dessner’s band The National was also featured on the track titled “coney island”, and Bon Iver returns to collaborate with Swift on “evermore”. There is no doubt that Swift has an incredible work ethic, and this was exemplified through her release of two albums in less than six months.

Taylor Swift has delivered in making a beautiful album that allows listeners to be transported back into the folklorian forest once again, and feel a sense of peace this holiday season. Give “evermore” a listen as it may be Taylor Swift’s best album yet.