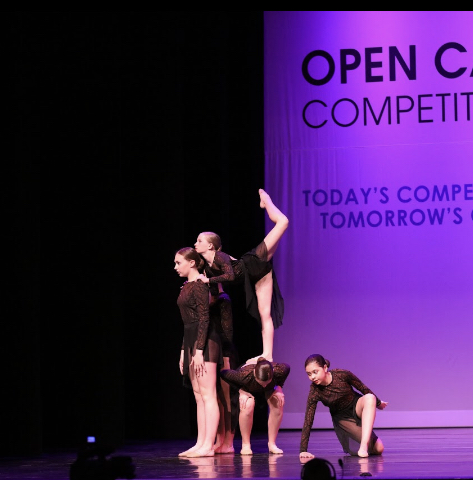 Ava Tino competing at dance competition. This image is courtesy of Ava Tino.

There are many bright, young, up and coming stars at Mendham High School, but among them, Ava Tino is one of the brightest. Ava has been dancing for 10 years and dedicates nearly 9 hours a week to dance and sometimes as much as 10 hours a week during competition season. She dances contemporary, tap, ballet, pointe, and lyrical. She enjoys tap and contemporary the most. She competes competitively and considers dance a true passion of hers that allows her to, “destress after a hard day of school.”

However, believe it or not, she was not always thrilled with the idea of having to dance. She says, “I started dancing in kindergarten and I quit for two or three years and tried out some other sports like soccer and softball and I wasn’t good at them and I realized that dance was what I wanted to do and it was what I liked.” Now a junior in high school she has a much different opinion saying, “Going to dance is so relaxing and it makes me feel happy.”

Not only has dance been a creative outlet for Ava it has also served other purposes in her educational career as well. She says, “It’s helped me to pick up on things quickly because for dance routines you have to memorize the choreography and pick up on it quickly and that’s helped me in school in lessons when taking notes. It also helps with working with people because in dance you have to feed off of each other and that helps when working with other people.”

It is clear that Ava is always up for a challenge whether that is taking AP and honors classes or learning how to dance tap. She mentioned tap was one of her favorite routines, but “in general, are definitely the hardest to learn because when your dancing in a group you have to make sound together and synchronized and also when your dancing in a tap number you really can’t make any mistakes without people noticing because your sounds have to be really clear and distinct and if they aren’t it just doesn’t sound right.”

Although dancing is clearly very special to Ava she says “I wouldn’t say I’m going to make a career out of it, but in college, I definitely want to do a club dance or be on a competition team for my college.” Ava dedicates a lot of time outside of school towards dance even attending conventions to further improve her technique. She says the “company Deviate is a company that employs working dancers who teach us routines and it’s been really cool to hear about their experiences and when they give us tips on auditions it’s really cool to learn about dance in the real world.”

She attributes her love for dance to Ms. Brittany, her contemporary dance teacher. She says “she’s really inspiring in contemporary she would allow us to make mistakes and learn from those mistakes. Instead of expecting perfection, she wanted us to make mistakes and learn from those mistakes. It was really helpful and the class was really fun to take.” She also says she looks up to “ ballerinas like Misty Copeland who is a really big role model and also within my studio the seniors. Every year for competitions we get paired with a buddy and I remember my first year I got paired with one of the seniors and I really looked up to her and she was a role model for me.”

Overall, it is clear Ava is a dedicated and truly talented individual who is self-motivated and driven to endure the pain and hard work that comes with competitive dancing.