The Ballad of Songbirds and Snakes: The next phase in the Hunger Games Series

Suzanne Collins is back with a whole new story to tell. 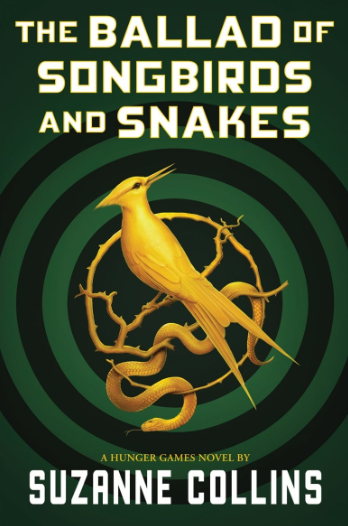 It has been eleven years since the first installment of The Hunger Games, written by Suzanne Collins; and nine years since the latest book of the series was released, The Hunger Games: Mockingjay. Now, after leaving the series alone for almost a decade, Collins is coming back with the newest book in the series, The Ballad of Songbirds and Snakes.“With this book, I wanted to explore the state of nature, who we are, and what we perceive is required for our survival,” says author Suzanne Collins.

The Ballad of Songbirds and Snakes is a prequel to The Hunger Games. It takes place  since-four years before the first book. It is centered around the tenth-annual Hunger Games. There is still not much detail as to the plot of the book. According to Collins the book takes place during “The reconstruction period, 10 years after the war, commonly referred to as the Dark Days — as the country of Panem struggles back to its feet — provides fertile ground for characters to grapple with these questions and thereby define their views of humanity.” It will not include any of the major characters, like Katniss, Peeta, and Gale. However, characters like President Snow and Mags, the winner of the eleventh Hunger Games and one of Katniss’ allies, will be included.

The cover was released, featuring a gold emblem of a bird and a snake encased in a thorny twig. A majority of the cover is a deep, emerald green.

The cover follows the general layout of the other books. It has a center image featuring a bird, and a basic background surrounding it. It does seem to fit and blend in with the other books in the series very well. David Levithan, a VP, Publisher, and Editorial Director for Scholastic, said, “This cover does an extraordinary job of capturing the conflict—both inner and outer—that lies at the heart of The Ballad of Songbirds and Snakes,” in a press release. He also explained how, “[One the cover] The Mockingjay has returned, but at a new angle… which is very much in line with the story that Suzanne Collins is telling.”

For fans of the movies, there is a plan to put the book into production. It is believed that production will begin once the book is released to the public. Lionsgate chairman Joe Drake says that he “can hardly wait for Suzanne’s next book to be published.” Drake also gets eager fans excited when he reveals that, “We’ve been communicating with [Collins] during the writing process and we look forward to continuing to work closely with her in the movie.”

Amazon, Barnes and Noble, and other book vendors have already started the pre-sale of the novel. The Ballad of Songbirds and Snakes is expected to be released on May 19, 2020, in the U.S., Canada, the U.K., Ireland, Australia, and New Zealand.